Serena Williams is a badass queen. A queen who works and fights incredibly hard. A queen who has broken so many barriers just by being excellent at her craft. A queen who is also not exempt from racial and gender discrimination despite being one of the greatest athletes of all time. So when I saw the clips from the match between her and Naomi Osaka—I was immediately triggered and of course outraged. Although I am not an athlete, I, like so many others could feel the passion in her frustration, and sincere emotion in her tone when she yelled out, “You owe me an apology!” after being accused of cheating.

I’m not going to tell you how to feel about the situation, because aside from the fact that reporters conveniently praised Naomi Osaka as the first Japanese woman to win a Grand Slam singles tournament, she is also half Haitian – and still black. With that said, it is heartbreaking that we didn’t get to fully celebrate one black girl’s win, because another black girl was clearly being discriminated against, and has had to deal with it throughout her entire career. She’s been through so much—including the time she was asked if she was intimidated by Sharapova’s looks, to learning that she was being drug tested more than her counterparts, to most recently having her catsuit be banned, even though it was specifically designed to help prevent blood clots– because she nearly died from giving birth. Even after the match, there was a racist caricature drawn of her, and it was so out of pocket – that JK Rowling chimed in. Ya’ll, the author of the Harry Potter books could be relaxing somewhere getting her coins, but she chose to call out this mess! And she knows evil, she created Voldemort! 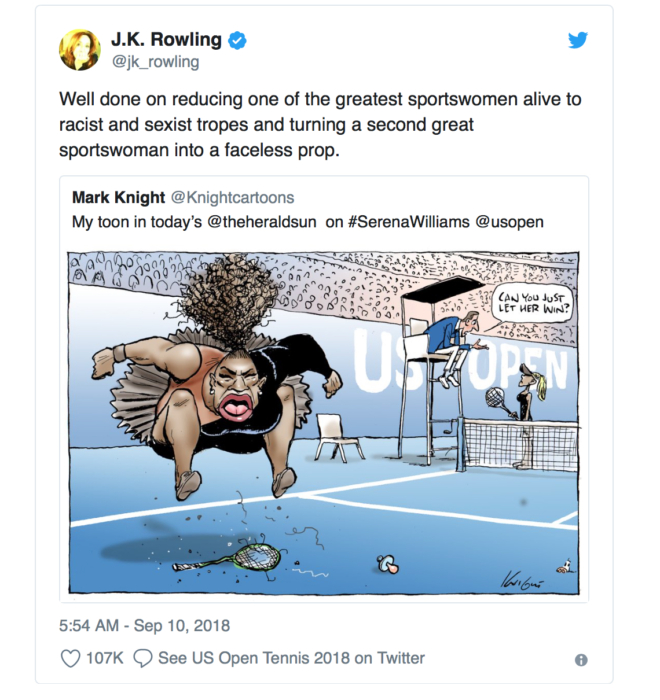 These discriminatory instances are just a few examples that we as fans, and the public have seen, so I can only imagine what she and other black women have had to deal with that are not covered by the media.

You Owe Me an Apology is so good, that I almost wish Solange would make it a song.  I also wish that Jesse Williams would put it in a speech, and say something to make the colonizers feel even worse than they did for the 10 minutes he bodied ‘em on the BET Awards back in 2016. I’ll also throw in that I wish that Tyler Perry would make a Madea says, You Owe Me an Apology blockbuster film, in which Madea goes back in time, snatches up the slave masters, puts them in prison and rewards us all our 40 acres and a mule. Hell, I even wish Kamala Harris and Michelle Obama’s 2020 presidential campaign slogan would be You Owe Me an Apology—but a girl can only hope.

Until then, this quote will just be added to one of my many personal mantras gifted to me by black women.

I stand with Serena and countless others who have been told that they are too loud, have attitude, aren’t pretty enough, not good enough—the list goes on. We are everything and more, because if we weren’t—they wouldn’t try so hard to push us down. Anyway, my list is as follows:

“You Owe Me An Apology.” – Serena Williams

PS—I really think that Madea says, You Owe Me an Apology, could be a real hit – what ya’ll think?

3 thoughts on “You Owe Me An Apology”